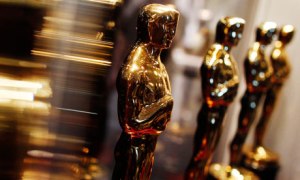 We continue our Oscar theme today, looking at the movies nominated for “looking” good…

What is cinematography? Well, the name comes from combining two Greek words: kinema, which means movement, and graphein, which means to record. In film, cinematography refers to the photographing of the movie itself. The person in charge of this is the cinematographer, also known as the director or photography or the DP.

In the hierarchy of a film set, the director’s two key creative people in the crew are the art director and the cinematographer. The art director is in charge of the art department and the cinematographer is in charge of the camera, electric and grip departments. The camera department maintains the camera and has it ready for the shot while the grips and electrics handle the lighting. Electrics set the lights and run power to them and grips shape the light by using flags and diffusion. Grips also provide support to camera department when there is camera movement for the scene. An example of this is a dolly shot. The cinematographer is one of the most important people that will be hired for a film. The visual look of the film is heavily dependent on him.

And here are the nominees:

I have not seen this film yet, but based on the trailer, it looks beautiful and artistic, so I can understand why it is a nominee. The trailer I saw was in Chinese, so I could not understand a word, but the look of it was enough to pull me in and make me want to see this film. I also love the woman kicking butt part, but that has nothing to do with cinematography 🙂

Another great “woman victory” movie!!! I love it! I saw this film in 3D…which you absolutely have to do to get the full effect. I am not really a fan of 3D, but this is well worth it. A definite contender in this category. Space looks and feels real. Scary! And Sandra Bullock totally rocks!!! 🙂

Although I am a fan of the Coen brothers, I confess I have not seen this film, but from the trailer one can see the very artsy look and feel of it. Of course I am not as technical as a seasoned cinematographer might be, but it looks really well shot to me. You can see the very specific choice the Coens made in the way this film looks, in order to match it to this story featuring folk music. It totally makes sense. And did I mention, I really like Justin Timberlake 🙂

I saw this touching movie with my husband recently. It brings home the reality of how age creeps into your immediate family. A marriage that has lasted years…and do we know why? Secrets that may be inside a man, that may now, never be told. And us, ‘children’, now adults…trying to figure our parents out and to do right by them. It’s a very sweet tale, definitely an actors movie, but an interestingly sober choice to have it in black and white, which makes for an interesting look into the very ordinary lives of these people. Had it been shot in color, the effect would not have been the same.

I absolutely adore Hugh Jackman and Jake Gyllenhaal, love Terence Howard and am in awe of Viola Davis, but I did not enjoy this film. It made me angry for much of it, but that is not what this is about, and besides it did quite well at the box office. Cinematographically speaking (is there such a word?) It did look good. And there was very good use of the surroundings in the nice suburban neighborhood, making for nice composition and interesting lighting. Yeah, not my favorite movie, but it does look good

Let me know your favorite picks and why. Let’s get an interesting conversation going here 🙂