However, the truth of the matter is that often, it is not actual fear that we are dealing with…it is F.E.A.R.

Fear is a Good Thing

Fear is an emotional response to an actual threat, and it’s a fundamental survival mechanism that’s served us well throughout human history. When you’re in immediate danger, fear tells you to get yourself to someplace safer.

Fear is also a true emotional response when we’re about to lose someone or something that’s important to us. So it’s not just about our personal safety – we can fear the loss of a loved one to illness, or our home to foreclosure due to unemployment.

That is talking about “real” fear, but here’s the problem. The sensation people experience in the face of taking action to achieve their dreams – business, personal, spiritual, whatever – is usually NOT true fear. 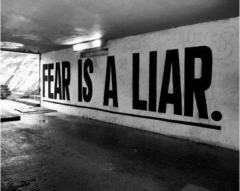 F.E.A.R. is an acronym for False Evidence Appearing Real. There’s no true threat of immediate physical danger, no threat of a loss of someone or something dear to us, actually nothing there at all.

F.E.A.R. is an illusion. Something we fabricate in our own minds and pretend is real. It’s a fairy tale we tell ourselves that keeps us from doing what we really want.

The common label for F.E.A.R is anxiety, a less fundamental emotion that arises purely from our own thoughts, not external reality.

“Anxiety is nothing but repeatedly re-experiencing failure in advance. What a waste.” ~Seth Godin

Are past failures real evidence that justifies fear of future failure? Nope, because unless you keep doing the exact same thing over and over and expecting different results (one definition of insanity), you have no real evidence that your next approach will fail.

Past failures generate false evidence appearing real. To the contrary, it’s likely you learned things from your past failures that instead provide evidence that your odds are now better than ever.

The worst-case scenario, of course, involves those who’ve never failed, because they’ve never tried. These people have zero real evidence of anything, and are living in the purest imaginary prison of the mind.

Guess what? Healthy, well-adjusted people take risks, without all this deep dread over specific outcomes. The journey is what you’ll relish, and it just might take you somewhere better than you initially hoped. No matter what, each journey teaches you what you need to know to take the next one.

Yes, we have a choice in how we think or act! F.E.A.R might grab a hold of you, but YOU can decide whether to give into it or not.

OR….I challenge you to take your False Evidence Appearing Real and turn it into a much more positive Acronym:

Feeling Excited And Ready!!! (thanks Neale Donald Walsh for that one)